Pilar Pando, our language teacher, decided to give us an online test. We had to watch an extract from the movie “Cien Años de Perdón”. Afterwards, we had to imagine that we were reporters and we had to write a crime report based on the events of the video.

A band of thieves succeeded in stealing a large sum of money in a bank in Valencia. Two policeman, Mike and Toby, are investigating the crime.

The gangster and the murderer Spencer Hastings and three guys robbed the bank to steal as many safety boxes as they could, Mike deduced. Toby affirmed that the criminals were actually robbing one box, the one from Lucy Montgomery. «She was a member of the government who slipped into a comma after an accident , inside her box she left thousands of checks of one thousand dollars each» Peter Smith, the leader of the bank, testified.

Three men and a woman were found in a van, in Street 17, with the same amount of checks which were stolen. The Police leader, Robert Perkins, took the passengers to the police station. The three accused men were plead innocent, and one of them exclaimed «It was her plan, we were just her accomplices». Toby guaranteed that they didn’t have an alibi, because they were inside the bank at the time the crime happened, so they were guilty.

Authorities decided that Spencer Hastings will be sentenced to life imprisonment, because she had killed more than twenty guys. The solicitor John Cyrus pronounced that the three men were also going to be in jail, but for three years only, because of their intention in committing the crime. 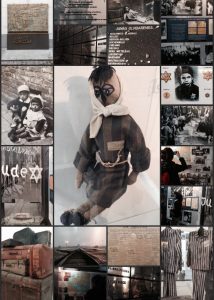 In our literature class, we started reading a short story called «Sredni Vashtar». After reading it we had to do some activities: prepared the structure of it, answered some questions and do an assignment on Pato’s blog. I did my work with Maria Roggero and Rosario Vago. END_OF_DOCUMENT_TOKEN_TO_BE_REPLACED

After having studied passive forms,  Pilar, our language teacher, told us to write a crime report using at least three passive constructions.  We had to choose one headline, between the ones she gave us, to write it. We also had to Include the vocabulary we learnt in connection with crimes.

Mom pleads not guilty to setting home afire with kids inside

Last Wednesday, In the suburbs of San Fransisco, An American woman was accused of setting a house on fire with her children inside. She was charged with arson.

Police officers, communicated that the woman, Lucie Rogers, had plead not guilty. Her neighbours stated that she was preparing dinner before the incident happened. Lucie poisoned her husband, David, due to the fact that she suffered from domestic violence. When she was interviewed, she confessed that she had poisoned her husband because of this reason.

The reporter, Charles Levingston, interviewed the criminal and affirmed she was only planning on hurting her husband, not her children. Police officers, found out that David wasn’t inside the house at that moment, since witnesses spotted him going to the market to buy some drinks. So when Mr. Rogers, her husband, entered the house, he would eat the food in a hurry because he was going to be very hungry, and the poison was going to work effectively.

Robert Smith, the police leader, claimed that when David entered the house, he noticed that Lucie had left the oven on and he could see that it started a fire that went from the kitchen to the living room, so he run away from the house. Lucie, few minutes later, had the same reaction, leaving her children alone in their rooms. In the court, she desperately affirmed, «it was an accident, David and I could escape but the fire trapped my children. I didn’t want to harm them».

Authorities decided that the criminal must spent at least 3 years in prison. However, Robert thinks that if she has a good solicitor, her sentence is going to be shorter. Levingston, on the other hand, analysed the relationship between Lucie and David and stated he must go to jail too, since he abused and mistreated her.