In our literature class, we had to answer some questions in our blogs about the story we read «The Lady in the Looking Glass». I did this assignment with Vignesh Manwani. After that Pato told us to find a picture of a room inside and a garden to illustrate the house in the story. I did the second task individually.

The lady in the looking glass from jperezmuniz

Picture of a room and a garden: Individual work

In order to illustrate the house in the story I chose the following picture. I chose it because it has antique wooden furniture and because of the fact that the dinning room matches with the «Italian glass» which has a «marbled topped table opposite» it and it reflects a garden beyond with «a long grass path leading between banks of tall flowers». The only thing that the picture does not provide, is the constant movement the room in the story has. However, we can image chaos and intranquility in this picture.

The story is related with this text since Sandra Gilbert, Susan Gubar and Virginia Woolf were all feminist literature writers. Over 1980 women writers were badly seen and they were discriminated by men writers for their work. What they have in common is that they fought for their rights in both their poetic identity and in their role in life rights. Virginia argued that women should kill the «angel» and the «monster» topology on her storys in order to end with the masks invented for women. We can see this in the story as the Isabella at the beginning of the story, the one who only shows her appearance, is dead, as that is not reality. At the same time, the Isabella at the end of the story is almost also killed as she is dead laive for not  having feelings or thoughts. So Virginia applies to the story her ideas of how woman must behave in order to make themselves be respected by men in their day to day life and in their literature works.

We read the story called «The Lady in the looking-glass», written by Virginia Woolf. This is a story of a woman that seems to be perfect and to have a perfect life. However, inside her house there is a mirror that framed Isabella’s personality. Through its reflection, we are able to see her true colours, how she really is.

At the end of the story, we found out that she was “perfectly empty”. The mirror is used as a kind of metaphor in which it compares the mirror itself and Isabella as they are very similar. The mirror is an object and so is Isabella. She is just a product of mankind. Isabella has been framed by society ever since she was created, and the mirror too. The mirror in this story it’s a motif that symbolizes what your real personality is and Virginia warns us that we may not like it. The mirror is used to criticize society, as it has been framed by men and Isabella too. Representing women in the 19th Century, Virginia illustrates how thoughtless, careless and feelingless Isabella is and blamed society for it for having created her that way.

After reading the story I prepared the following presentation to express my interpretations of the story.

Furthermore, I would like to add to my e-portfolio another activity on the poem called «Home is so Sad», written by Philip Larkin

Home is so Sad

The fact that the poem starts saying “Home is So Sad”, makes reference to the fact that, for Larkin, they are uncomfortable. This contradicts normal houses, since they should be happy places. In this case they are not cosy, since he is talking about an abandoned house, that need attention from someone: “stays as it was left”. This exposes the fact that an abandoned house has nothing, since it can not be called home. The poet emphasizes this with the words “bereft” and “theft”, in order to express how lonely the house is plus the fact that it lost someone important.

The poet describes a house “with no heart”, since its an inhabited place. So when the ‘heart’ is removed from it, the humanity, the house has lost whatever makes it a ‘home’. So it is now empty. The poet describes that “comfort of the last to go” by presenting a few images of how the house was left, when someone lived there. In order to make this possible he mentions the “pictures” and “cutlery” that the house has from her previous owners.

Through an auditory image, he is also able to portray a familiar sound: “the music in the piano stool”. By presenting this, the poet expresses the memories that the house has about her previous owners. Here the room is personified to a memory, as inanimate objects bring back specific memories no one else can see. The fact that the piano does not have any description at all, emphasizes the fact that only the owners of the room can really picture it, because it was their memory.

So when I was reading the poem, I realized something was missing. I could not understand what it was, but later I had an epiphanic moment. The poem is full of images such as tactile, visual and auditory. So I imagined that I could increase those nostalgic and melancholic emotions about home, by adding the piano music and images to visualize and set to music the magnificent alliterative poetry.

This is the song I chose to musicalize the poem:

I also found this quote which I relate it with the poem, because both talk about it as something that is horrible and sad, that’s the reason we want to leave it. However, when we grow old, it is a place we want to get back to.

In our literature class, we read the poem called «Rooms», written by Charlotte Mew. 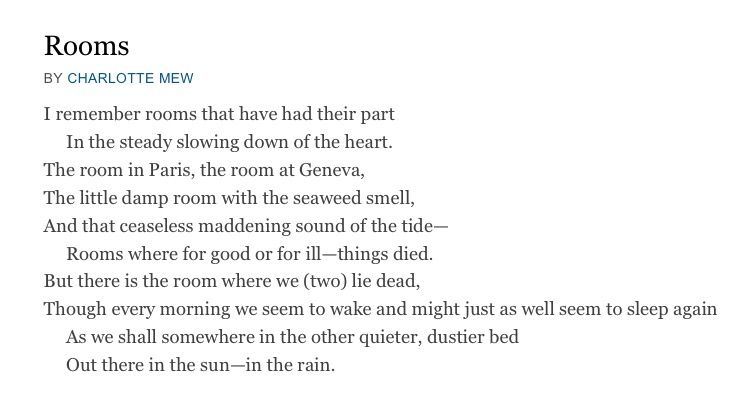 The poem “rooms”, written by Charlotte Mew, describes two double meanings for that place. On the one hand, Charlotte describes rooms, simple rooms. She describes their smell and their noises. “ceaseless maddening sound”, in order to make us see how rooms look like. She talks about rooms in every part of the world, and she also talks about an specific one, a grave. On the other hand, by the repetition of “rooms”, we are not only able to read how she uses it, but we are also able to understand what does it really symbolize. The poet talks about abandoned “rooms”, that symbolize memories. In order to express those feelings, she portrays the fact that memories, rather happy ones or sad ones, die: “Rooms where for good or for ill—things died”, it does not matter if the memory is about love or abandonment, since all of them are going to die in our minds some day. In order to express this, she describes a specific room, a “dustier bed”. By mentioning a grave, Charlotte is able to emphasize her feelings about the fact that every memory is going to die someday, “Out there in the sun—in the rain”, it does not matter when, some day they will.

In this post I made a collage that shows many kinds of rooms: happy ones, abandoned, forgotten, rotten, colorful, etc. I created this to portray Charlotte’s point of view about the fact that rooms are memories, and memories die in our minds. No matter if they are delighted or sorrowful memories, what matters is that, at the end of the day, all of them will disappear, they will die. 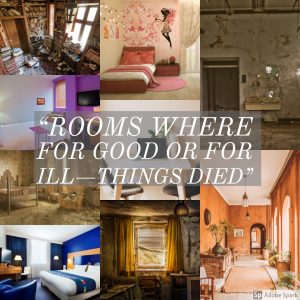 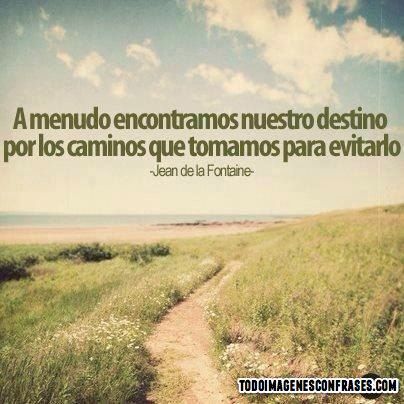 In our art class, we started a project after our teacher, Toia, showed us many sculptures, installations, paintings, etc done by different artists. The task consisted in choosing one artist with their art piece, as we were going to work with it all this term. I decided to do my work in group, so I worked with Rosario Vago, Federica Marty and Milagros Mendez. We chose Cornelia Parker with her installation «Dark Matter».

Artwork analysis from jperezmuniz
Following our deep analysis on the installation, we had to create some of our own, so we started having a lot of ideas in order to create something new based on what Cornelia exposed. In our following presentation, our creative process is shown.
Presentation:

In our history class we prepared a presentation about the Enlightenment. I did it with Silvestre Braun, Jerónimo Leguizamon and Ignacio Maestro Malek.

In our biology class, we made presentations about different drugs. I had to prepare one about tobacco smoking with Federica Marty, María Roggero, Rosario Segura and Silvestre Braun.

In our language class, our teacher Marcela divided us in several groups and told us to do a presentation to explain the vocabulary of different topics in order to improve our English. I had to prepare a presentation about degree and intensity and I did mine with María Roggero and Vignesh Manwani. This is it. At the end of it we prepeared an activity in case you would like to improve your English too!

Numbers and quantity from jperezmuniz