We read a poem called “Ode of Melancholy”, in our literature class, written by John Keats. Through a sorrowful and dreadful theme, Keats is able to outline how to embrace melancholy and depression and how to make the most of it. For this e-portfolio, I decided to include some quotes that, in my opinion, deal with the same message Keats expresses. I found more interesting to add a picture to each quote, with pictures I took! According to the speaker, melancholy and sadness are part of the natural human range of emotion, and in order to really experience joy, we have to allow ourselves to experience sorrow as well.

I also connect this poem with something personal that happened to me. We read this poem after we have gone to our spiritual retreat. There I understood something new that actually is very similar with what Keats tells us. I understood we need to fully understand and accept melancholy to be able to enjoy the positive aspects of life. Because without experimenting melancholy, we are not able to feel and understand joy. We wouldn’t be greatful and happy of the good things if we are not able to see the difference between the positive and the negative aspects of life. And we can only understand that difference by living it, by feeling sadness and sorrow. In the spiritual retreat I was able to accept melancholy, to see the difference. Something that is not easy, but worthy, in order to be happy and feel love. 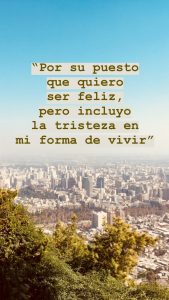 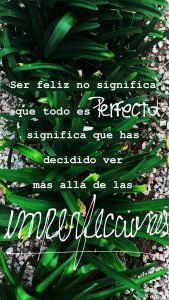 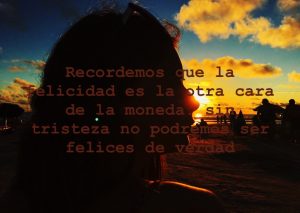 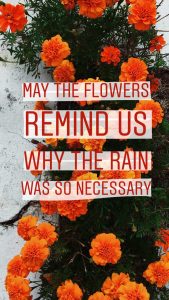 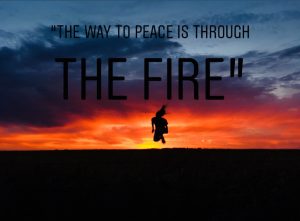 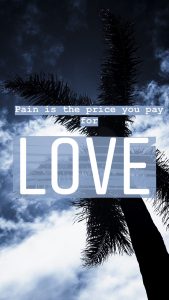 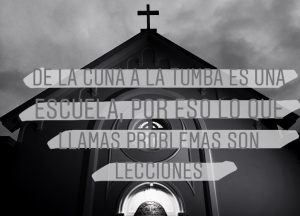 In our literature class, we read a story called “The Destructors”, written by Graham Greene. This is a story of a gang of kids who live in a fragmented society, after the Second World War, in London, “the site of the last bomb of the first blitz”. Greene emphasizes the fact that children are growing in a society full of hate by presenting a family who has suffered the consequences of the blitz and become part of a lower social class. He outlines how the child of this family ended being a monster and he explains that his behavior is due to society itself, as a consequence of war. So the author criticizes war and exposes its consequences. He portrays how society is creating monsters, rather than children, by illustrating the evil nature of man, the loss of comparison and the destruction for the sake of destruction as his main themes.

I found really interesting to include a testimony of the time, presenting how the situation was for the people who suffered the bombs. I thought that having real evidence of how people lived that atrocities, could emphasise how cruel and horrible the blitz was, in order to understand the consequences it has on society, and the reasons why Greene decided to include the event on his story. After all, Who is more capacitated to speak about the bombs than the ones who actual live them? No one can describe the people thoughts, beliefs and feelings at London’s better than themselves.

I chose a testimony of a couple. Elizabeth Belsey was living in the family home in Keston, Kent, while her husband, Lieutenant John Belsey, served with the Royal Artillery at Thames Ditton in Surrey. Here is an exchange of letters between them.

I really like to see what people believed at the war. Ir is really interesting to notice how the war affected not only this poor family, but thousands more. Here we can see how a family was forced to live different lives as a consequence of war. War breaks families, and make them miserable.

This letters helped me to understand how society was and how London collapsed. They suggest how fragmented society was at the time and it make me realize the fact that Greene’s story is a great one whose message is effectively portrayed. Greene effectively conveys how damaged London is by describing how damaged Trevor’s family is, as they become part of a lower social class. The author outlines what is happening at his surroundings and he wrote a metaphorical story to explain how terrible war is. He criticizes men for destroying things for the sake of destruction and I believe that he is actually warning us the fact that society can be even more damage than what it already is. Not only Greene presents a fragmented society, but he also exposes how an educated kid, ended being a monster. The author is warning us how awful society can be if we keep on fighting.

I also relate the story with a poem we read called “In Time of the Breaking of Nations”, written by Sir Walter Scott. We read this poem when we were reading war poetry. 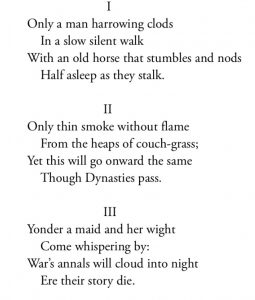 I found really interesting what the authors expressed in their literary works, since they transmit a similar message. Scott confesses that war will always happen no matter who is in charge. “Yet this will go on wards the same though Dynasties pass”, even though time passes on, war will always meet the following generations. The poet is telling us that when there are people, there is war. So by illustrating and showing the effects of our horrible encounters, he is trying to warn us the consequences of our acts. He does this with the desire that we can analyse whether the fights worth the destruction they caused. The poem is trying to prevent new wars, by presenting the damages past ones caused. Greene presents a very similar theme, since he introduces a fragmented society in his story to explain how war damages people. He portrays the reason why children are behaving as monsters, and that is due to war. So both Greene and Sir Walter Scott describe the consequences achieved by war, in order to prevent more of them.

In our literature class, we read a poem called “Ode on Melancholy”, written by John Keats.

Ode on Melancholy by JOHN KEATS

No, no, go not to Lethe, neither twist

Nor suffer thy pale forehead to be kiss’d

By nightshade, ruby grape of Proserpine;

Make not your rosary of yew-berries,

Nor let the beetle, nor the death-moth be

Your mournful Psyche, nor the downy owl

A partner in your sorrow’s mysteries;

For shade to shade will come too drowsily,

And drown the wakeful anguish of the soul.

But when the melancholy fit shall fall

That fosters the droop-headed flowers all,

And hides the green hill in an April shroud;

Then glut thy sorrow on a morning rose,

Or on the rainbow of the salt sand-wave,

Or on the wealth of globed peonies;

Or if thy mistress some rich anger shows,

Emprison her soft hand, and let her rave,

And feed deep, deep upon her peerless eyes.

She dwells with Beauty—Beauty that must die;

And Joy, whose hand is ever at his lips

Bidding adieu; and aching Pleasure nigh,

Turning to poison while the bee-mouth sips:

Ay, in the very temple of Delight

Veil’d Melancholy has her sovran shrine,

Though seen of none save him whose strenuous tongue

Can burst Joy’s grape against his palate fine;

His soul shalt taste the sadness of her might,

And be among her cloudy trophies hung.

After reading it, Pato told us to watch a video and analyze it. I work with Vignesh Manwani and Rosario Vago.

After we analyse the poem, we had to answer some questions of the following guide.