In our literature class we read a story called «Tyres», written by Adam Thorpe. Here is the analysis of it and the stages of rite of passage I wrote with Victoria Landolfo, Lola Villegas, Rosario Vago and Sybilla Correa Perkins

Love and war get interconnected

• Climax: point of no return
He finally feels involved/touched

Ending (p. 407)
Dead -alive
• he is alive but dead inside
• Narrator:
~ feels guilty
~ he never grew out of it
~ senseless life
~ stagnation (stillness)
• he spends the rest of his life paying for his mistakes

• Voice: a narrator telling his memories (a flash back)

• Theme:
~ never letting go
~ paying for your mistakes
~ loyalty to the girl, country
~ love for the girl and for France
~ no cutting corners
~ love vs war
~ how individuals are kind of determined by the reality of society and the content they lived in

STAGES OF RITE OF PASSAGE:

Rite of passage from Pato_Ch

from not knowing that war was near to experiencing it.

Trespassing and dare are connected

In our literature class we read a poem called «Song» by Lady Mary Wroth. After reading it, we did an analysis and we complete a photocopy explaining what does each stanza mean. Afterwards, we saw a presentation on our teacher’s blog and we comment if we agree with that presentation or not. I wrote my comment with Rochi Segura and Fefi Marty. 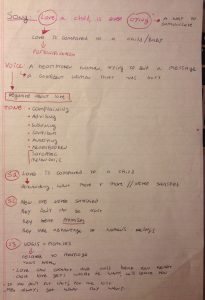 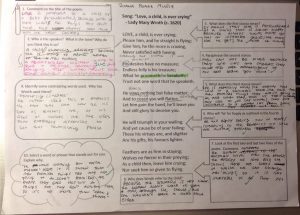 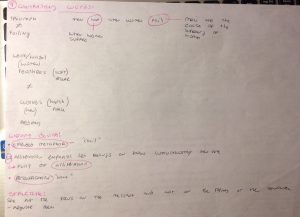 In our Language class, we started reading a short story called «Dumb Martian». Pilar, our teacher, chose some students to prepare a presentation about the analysis of the story. I did the following presentation with Rosario Vago, Rosario Segura, Gonzalo Criniti, Silvestre Braun and Lola Villegas Argento. In the analysis we wrote the plot of the story, the characters, the theme, the tone, the setting, the irony of the title, the atmosphere, the message, the point of view and the vocabulary. Also, Pilar told us to prepare the presentation on a specific program, which was, classtools (movie text). Hope you like it!